Thoughts on place, life and home

In the spring of 1930, past owners of our old house readied to install boldly-patterned lino in large square sheets over the bedroom floorboards. In preparation, they laid down splayed pages of The Halifax Herald, Nova Scotia’s newspaper of record.

The Grey Lady of Argyle Street, as the Halifax Herald was known, was a true broadsheet – its tiny font typeset in dark ink to produce a paper densely packed with the goings on in Nova Scotia and further afield. By April 1930, the paper was already able to boast of its “Fifty-five years in the public service” –   the successful merger of the The Morning Herald and its competitor, The Chronicle.

April 7, 1930 was a big news day. A world away from Halifax, in Dandi, India Mahatma Gandhi had narrowly avoided arrest along with his followers in a protest over India’s salt manufacturing monopoly.

Closer to home, Captain Gerald Lewis blamed the U.S. Coastguard patrol ship Frederick Lee for the sinking of his Lunenburg-based schooner the Aramay. Laden with more than 700 crates of “choice liquors”, the Aramay was either deliberately sunk during seizure or sprung a leak while under Coast Guard tow outside of Boston. Captain Lewis, an unabashed rum-runner, demanded an inquiry and payment for his ship and its lost cargo. 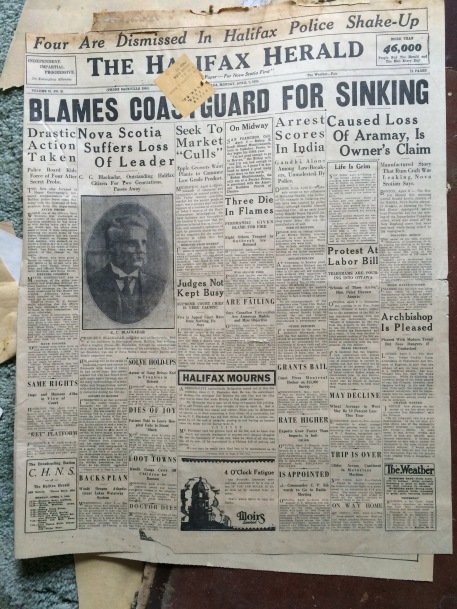 Rum-running was dangerous work, but so too was fishing. That week alone, the schooner Jean Smith had limped into Lunenburg with 12 stanchions broken after fierce northeast gales whipped up waves on the Western Banks fishing grounds. The Robert J. Knickle lost an anchor and 150 fathoms of hawser when crews cut it free in their effort to get to safety as the storm blew in.

Whether from fish or from booze, the reward for captaining a ship outweighed the risk in 1930, when the full impact of the Great Depression was yet to reach the shores of resource rich Nova Scotia.

But below the 49th parallel, the 1929 stock market crash was taking its toll.  Summed up under the blunt headline, Life is Grim, 1930 census takers in New York recounted desperate conditions. In the Bowery district alone they found 12,000 flophouse beds fully occupied and some 3,000 more “drifters” sleeping in speakeasies.

And, in a simple house with a good barn and a pretty water view, the long ago owners were putting yesterday’s news to good use, installing a fashionable and serviceable floor with no inkling of what was to come in the years between their simple job and ours.

4 thoughts on “Running rum and renovating”